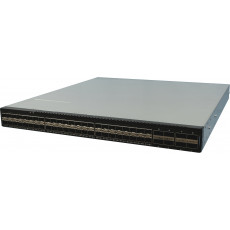 Is based on Barefoot Tofino switching silicon and well-suited for Top-of-Rack/Spine Datacenter, Enterprise, and Cloud Service Provider network deployments. It has 48 x 25GbE SFP28 and 8 x 100GbE QSFP28 interfaces, which can be configured up to 80 x 25G with break-out cables for high-density scenarios, and delivers full 2.0Tbps throughput.

It is a unique network development platform, designed to bring the twin pillars – performance and programmability – together for the first time in the history of networking. The combination of the Tofino programmable switch chip, the P4 programming language, and Capilano toolset are revolutionary.

Barefoot Tofino™ – the world’s fastest switch silicon, that happens also to be programmable.

P4 – Programming Protocol-independent Packet Processors – www.p4.org exists now as an independent entity to develop a rich open source ecosystem. Unlike human languages, a programming language such as P4 can unambiguously specify the behavior of network forwarding behavior. A programmer can describe the behavior once, then compile the program to run on a variety of different platforms.

Capilano – the compilers and development tools needed to compile and debug programs to run on Tofino.

A ready-to-use NOS, SONiC –  a collection of networking software components required to have a fully functional L3 device, is available for data center applications.

The switch has a BMC (Baseboard Management Controller) onboard to provide server-like monitoring and power control function through a shared Ethernet interface.